I don't like to make a big deal about my own birthday, but I really enjoy planning other people's birthdays. This year, I planned a menu just for us and then had a big group of friends over for chocolate torte and whipped cream. 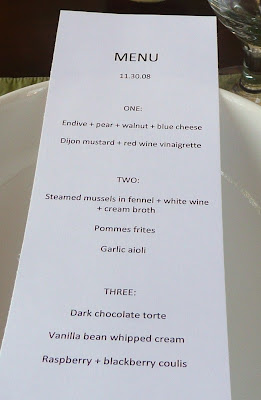 This year, he requested a chocolate torte. The torte I always make is from an article I came across in the New York Times a few years ago. It is a bit non-traditional: the recipe calls for you to stop baking before the crumb is fully developed and to refrigerate it at least two hours before serving. During a stint in the refrigerator, the torte falls a bit (no chemical leavening!) and you end up with a deeply chocolate-y, creamy, dense center. I would compare it to a very good truffle.
My only advice is to use high-quality ingredients. In particular, the flavor of chocolate is front and center. My brother once made two of these to bring in to a work potluck, one using bittersweet Ghirardelli chocolate chips (which is still one of the best supermarket brands) and one using a really fantastic Callebaut 65% cacao chocolate bar. We did a taste test the next day and were blown away by the difference in flavor between the two. The torte made with Callebaut was both fuller-flavored and better-textured, whereas the Ghirardelli torte tasted a bit flat and greasy. If you can, I strongly urge you to seek out the best quality dark chocolate you can find. 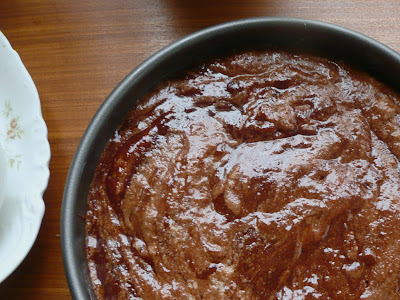 2. Finely chop chocolate using a serrated knife and combine with butter in a dry bowl or small pan. A double boiler works, but you can also melt it in several short blasts using the microwave. Stir to combine and set aside.
3. Separate 5 eggs, keeping the yolks in one medium mixing bowl and the egg whites in another (preferably the bowl of a stand mixer). It is important that not one speck of egg yolk remain in the egg whites, or they won't whip properly.

6. Bake for 25 minutes. Remove cake from oven and allow to cool for 1 hour.

7. Wrap with foil and refrigerate until cake is firm and cold, at least 2 hours or overnight. Two hours before serving, remove cake from refrigerator and bring to room temperature. Slice (center of cake will be fudgy) and serve, if desired, with whipped cream.
Posted by Kim at 13:41