My brother, sister, Mark, and I are in love with what we like to call MomSpeak, MomSpeak being the hilarious and adorable emails that my mom sends to all of us. After more than 25 years in this country, her English is very good (she regularly beats all of us in Scrabble, to my dad's chagrin) but she has a really funny habit of mixing metaphors or using words that aren't necessarily used in casual conversation. We never know what she is going to say next.

We ate this all the time when we were kids, probably because my dad grew up eating this and loves it. And why not? Jones Tasty Hearty Healthy Beanie Soup is indeed Tasty, with creamy beans, salty and smoky ham, and a smidge of sweetness from softened carrots, onion, and celery. It is Hearty, really more of a stew than a soup, and (I'm quoting my mom here) is "perfect for a bone chilling day." Finally, this soup is Healthy, the beans --excuse me, beanies-- provide a wallop of fiber and protein. The name is apt. Good job, Mom.

Unfortunately, I don't have a photo for you, because my brother inhaled everything before I had a chance to take one. Instead, I offer this, as a reminder to stock up on clementines! 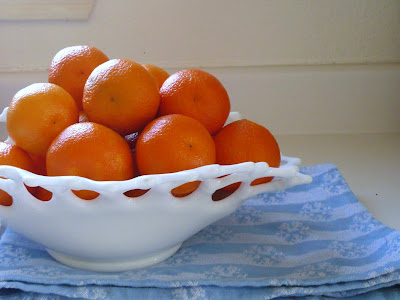 My mom says that ham shanks are preferable to ham hocks because they provide more meat for the soup. However, when I went to the grocery store, there were no ham shanks to be found. Instead I bought 2 large ham hocks and a ham steak. By the way, I think 1 pound of beans is roughly $1.00, the ham shanks were $2.50, and the ham steak was on sale for $3.80. This is recession-friendly fare! This soup filled our le Creuset French oven (which is 5.5 quarts of beautiful red enameled cast iron) almost all the way to the top, so you will need a large vessel in which to make this soup.