a shade past uncomfortably hot

My usual harissa recipe -- this one -- is rather good. Unfortunately, it calls for deseeding 4 ounces of dried chile peppers. I know that 4 ounces doesn't sound like much, but as dried arbol chiles weigh basically nothing, a deseeding operation ends up equaling the duration of an episode of Friday Night Lights. Or as a normal person might say, 45 minutes. But I like to bring up Tim Riggins when it's relevant, you know?

Recently I tried a recipe for Tunisian harissa from Jerusalem, the cookbook by Yotam Ottolenghi and Sami Tamimi. It is significantly less work than my old standby, especially if you remember to plop a red bell pepper on the grill the next time you are grilling chicken or whatnot. With that step out of the way, you are well on your way to zizzing up some harissa a few days later. The result is velvety and fragrant, a little sweet and totally spicy. Harissa is supposed to be hot and this iteration is a shade past uncomfortably hot. I think that's about right. 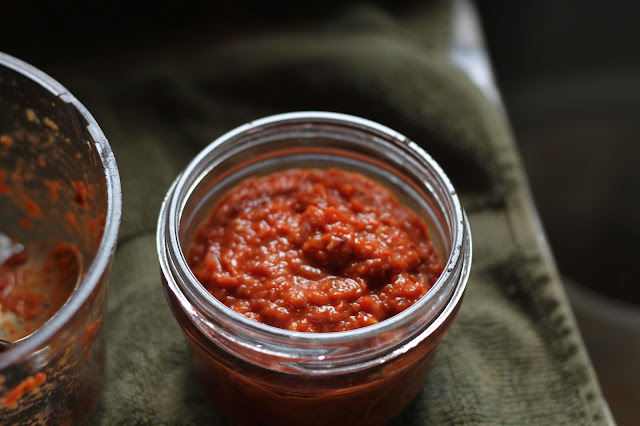 So far, I've mixed this harissa with Greek yogurt to make a dipping sauce for lamb and beef kibbeh (that kibbeh recipe is also from Jerusalem and it is awesome). It jazzes up hummus, shakshuka, and couscous nicely. And I'm looking forward to giving my busy-day lunch of Triscuits, sardines, and hot sauce a kick in the pants. If you're here to know whether the harissa recipe in Jerusalem is worth making, the answer is yes. Incidentally, it has kept for a lot longer than the "up to 2 weeks" period they stipulate. 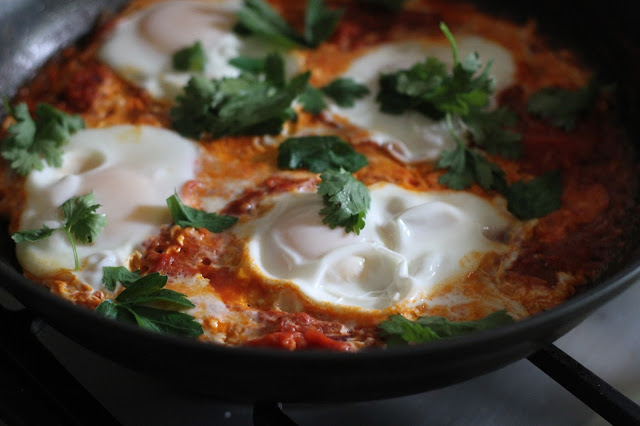 [Shakshuka with harissa. Jazzed up.]

Before we delve into the harissa recipe, though, I want to share a picture of the Turkish bath towels Mark hunted down for me when he was in Istanbul earlier this summer. The towel situation is notable because Mark is, let's say, skittish about color. As an example, I recently picked up a bunch of dress socks for him, including a fantastic pair of striped navy, periwinkle and gray socks. He balked. I think his exact words were "nope, too many colors," and when I pushed back, he uttered the ominous words "remember the cardigan," which he says only when he's serious in his distrust of my taste. But behold: WHAT IS HAPPENING. 6 towels, 6 patterns, more than 3 colors. Maybe he threw me a bone because he got to go to Istanbul and I didn't, or maybe almost 11 years has had a tiny effect on him. I prefer to believe the latter.

OK, let's get to my recipes notes.

***A quick note about chiles: The cookbook wasn't specific on what kind to use here. I used 1 habanero chile and I was happy with the intense heat level. If I'd had serranos, I would have used 3.

Grill the pepper over hot coals, or broil in the oven, turning occasionally for about 25 minutes, until blackened on the outside and completely soft. Allow to cool, then peel the pepper and discard the skin and seeds.

In a dry frying pan over low heat, lightly toast the spices for 2 minutes. Remove and grind to a powder, either in a grinder or in a mortar and pestle.

Add olive oil to the pan and fry the onion, garlic, and chiles for 10-12 minutes, until a dark smoky color and almost caramelized.

Now use a blender or food processor to blitz together all of the cooked and remaining ingredients until smooth, adding a little more oil if needed. Store in a clean, sterilized jar for up to 2 weeks or more.
Posted by Mark at 21:00

From this sauce I was able to get a whole new taste in the recipe which I was making today. I was never having idea that we are able to make such delicious food at home with this sauce.

Positive site, where did u come up with the information on this posting?I have read a few of the articles on your website now, and I really like your style. Thanks a million and please keep up the effective work Nonton Drama Korea