Last week we had a day that was damp and chilly, not enough to break out a jacket, but enough that I found myself putting in a big order of loose leaf tea and plotting soup strategies. Of course it's warmer now, but oh man, the promise of cold months and building fires and big pots of stuff simmering away, I just can't help myself.

In the last two weeks, I've made the same red lentil soup a couple of times, which I only do when I am really taken with something. This soup is similar to the recipe I wrote about here, but gussied up with Turkish dried mint and Aleppo pepper flakes. Aside from fresh mint garnishes in Vietnamese dishes, I rarely use mint, but here the dried stuff adds a subtle note that really complements the tomatoes and the lentils. I had no idea dried mint would engender Such Strong Opinions in me, but it totally makes the soup. In fact, I'd say you could replace (or omit) the Syrian pepper, but I wouldn't bother making the soup without dried mint. 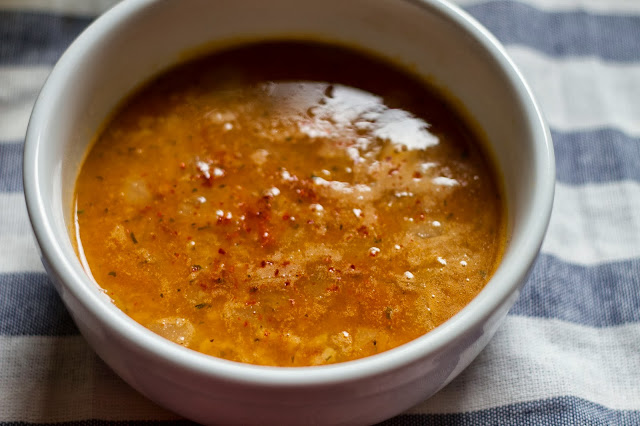 Come mid-winter, I'll try this recipe using canned tomatoes, but I think this soup really benefits from the mild sweetness and tenderness of fresh tomatoes -- they melt into the broth, adding a bit of acidity without taking over. Our tomato plants are turning that coppery brown that means tomato season is trailing to an end, so hop to it. Shopping list: tomatoes, nubby red lentils, chewy bulgur, and DRIED MINT.

In other news, Mark and I sat in the same room with THE Debbie Harry last night. I was too intimidated to say anything but hello, but she is an amazing performer (and 68 years old!). Mark's elementary school friend Tommy plays guitar in Blondie, so we saw the show and then hung out backstage for a bit. I decided it'd be rude to ask Debbie Harry to take a picture with me after she had showered and taken off all her stage makeup (it would have been, right?) but I'm still a little bummed I didn't get one. If I'm ever backstage with Stevie Nicks, though...

Lentil soup with dried mint, tomato, and bulgur
adapted from Anya von Bremzen's recipe in Melissa Clark's In the Kitchen with a Good Appetite

I followed the recipe almost exactly, though I add more garlic and reduce the bulgur so the soup stays a bit brothier. No lemon because I thought it was a perfect level of acidity, and I didn't float butter on the end as she recommends. The second time I made it, I swapped water + better than bouillon for the chicken broth, because I didn't feel like waiting to defrost chicken stock from the freezer. It was not shabby at all.

1. In a large pot over medium heat, melt the butter and add the onion, salt, and pepper. Cook until the onion is soft, then add the garlic and cook until fragrant.

2. Stir in the tomato, tomato paste, and mint, and cook for an additional 1-2 minutes. Add the lentils and bulgur and cover with the chicken stock, plus 2 additional cups of water. Cover and simmer for 30-45 minutes, until lentils are tender. Serve with extra mint and red pepper.

I like this soup, but I also think it tastes good with no broth and just water. Then lemon at the end is necessary! Plus olive oil, not butter on top.

I request something with buckwheat, eggplant, or a good all-purpose sauce (like the one you make with tahini?)